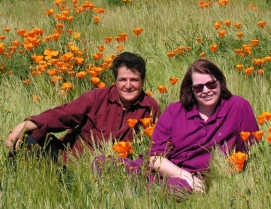 Wildflowers are rebels, outcasts who refuse to grow well tended in gardens. They come and go capriciously, carried by seeds on the wind and appear sporadically as the seasons change. They are literally the hippies of the flower world.

My wife is former Air Force and has a very negative view of hippies. She is a naturalized citizen and did not grow up in America in the 1960’s, as I did. During her eight years of service, she watched videos of soldiers returning from Vietnam being surrounded at airports and called ‘baby killers’ and ‘war mongers’ after grueling tours of duty. Many hippies were war protestors and were described as dirty, lazy, sex-crazed, drug-using bullies. To this day, that’s the way she thinks of them.

I, on the other hand, was just a handful of years too young to have been a love child of the 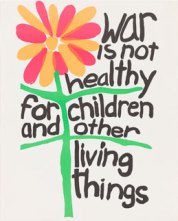 60’s. I was only eleven in 1968 and had to watch from the sidelines as people my babysitter’s age got involved in social issues like civil rights and fighting for equality. The hippies embraced bright colors (remember Day-Glo?) and looking at the world through rose-colored glasses. Their clothing was sexy, freeing, and exotic all in one. The ones I knew personally were college students, young, vibrant, beautiful souls trying to make the world a better place.

They spread love instead of hate and faced power with peace. Flowers became a symbol of the movement when they were inserted into t

he barrels of guns held by soldiers called out in response to peaceful protests. As a form of protest, it was visually arresting. Even as student protestors were gunned down by their own government’s forces, they answered with the teachings of Dr. Martin Luther King, Jr. Peaceful resistance, they told us, was the only way to change the violence in the world.

But the propaganda machine, paid infiltrators, and the inevitable righteous zealots shaped the national conversation to the one that was fed to our military stationed overseas, including my wife. Her version is the one that most younger Americans hold because they weren’t there. They don’t know. They know only the characterization of hippies, not their character.

And protests of any kind, speaking truth to power, calling attention to social issues, standing up for those undervalued or mistreated, have become anathema to American Citizens Joe and Jane. We, those who sit before our national network television or our backlit computer screens, have bought into the idea that we should only protest on social media, without muss, fuss, or interruption of the daily duties of corporate America.

Colin Kaepernick, Megan Rapinoe, and others like them are protesting peacefully when they refuse to stand for the national anthem. They are not hurting anyone, or blocking buildings, or bringing traffic to standstills. They are not yelling, disrupting, or forcing their behavior on others. They are exercising their RIGHT as an American citizen to protest when they disagree with their own government’s behavior. They are breaking no laws. Let me repeat that for emphasis. THEY ARE BREAKING NO LAWS. These young athletes are the wildflowers among us. They refuse to grow in the shade of our carefully tended national garden, instead insisting on their right to raise their heads defiantly to the same sun and stand proud, free, and beautiful. They won’t be planted, tended, and harvested at anyone else’s pleasure. Their peaceful protests have brought attention to a situation they feel strongly enough about to risk their careers. This is their country, and they’re not happy with the way things are going in their government. They must vote to change things, speak up to be heard on issues important to them, and protest effectively when they feel their government is doing something wrong.

That’s their duty as American citizens, not standing while a song is played over the loudspeakers. In America, patriotism cannot be mandated by the government. That is precisely what makes us a democratic republic and protects us from tyranny.